For a long time, Lux Mundi has had different clubs and activities, such as the school band, UN, debate, and much more. It even has a newspaper, where the students write about different activities and problems regarding the school and its environment. However, the school only provided this opportunity in Spanish. Fortunately, this year, the school presents to us the English Newspaper.

This new project is very similar to the Spanish version. Different kids from certain grades develop their writing and communication skills by talking about different situations concerning the school’s state. Because the English Newspaper is new, it has some characteristics or modifications that make it what it is.

To make it more accessible, the newspaper is now digital. This means that it is only available through an electronic device, which is possible by going into its official website. Also, this year, the newspaper was lucky to receive a lot of new members. Because of this, we now have different roles to distribute the work. 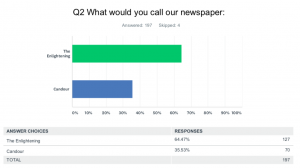 Finally, the newspaper needed a name. An identity. In light of this, the members pitched names, The Enlightening and Candour. The students had the chance to vote for one of their preferences. These were the results of the survey.

As you can see in the graph, The Enlightening was chosen as our name. Alongside it, some of the people from the newspaper pitched diverse and creative ideas for a logo, and those were modified into the logo we have now.

We hope to use our newspaper as a tool to inform this community of everything that is happening and learn while doing it. It won’t be easy, but we’ll try. That’s what the newspaper is about.