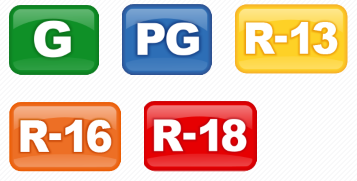 Upon DC Comics’s “Joker” most recent success on the global box office (which had a whopping $93.5 million on its opening weekend, defeating Marvel’s “Venom” who had its own record-breaking success) we can’t help but notice these two box office giants have a thing in common: audience ratings.

Before I get to my point, you must be asking yourself, what is an audience rating? Simply put, it’s the restrictions applied to the viewing audiences depending on certain criteria. I’m sure at least once in your life you have seen or heard of it; that green screen at the very beginning of most trailers that warns you about it, the ticket stub from the movie says it, cinemas, like Palacio del Cine, show it in the movie schedule screen before you can even buy the ticket.

According to the Motion Picture Association of America (MPAA) there are four fundamental audience ratings:

With that being said and explained, we’re going back to my key point in the introduction about two particular record-breaking movies. A lot of factors apply to a success of movies of this type, but another thing they have in common that’s easy to spot: they both belong to massive franchises.

Marvel and DC are franchises that make comics. Most of the work they do is PG-13, which in countries like the Dominican Republic, it’s a synonym for rated G. Most people go to Marvel and DC movies. It’s entraining. Kids love superheroes, but here’s where our problem comes. These two cinematic giants are being set in the stereotype that all their movies are for children. At the end of the day, it’s all about a superhero, right? No. That’s not the case. A common factor in the few R rated titles these franchises have is that they’re never about a hero. Marvel’s Deadpool isn’t a hero, for example. Just because you see the franchise’s logo it doesn’t mean it’s going to be a story about a goody two shoes saving the world.

Recounting from a personal experience, I was 12 when the first film was released. My dad expressed his total concern on the rating displayed, and I respect that, so I didn’t go with him and his friend, like we usually do when it comes to Marvel films. Thank God I stayed home, I realized after watching the movie two years later, even though my physical age didn’t make the standards, my mental age definitely did. It lived up to the rating it had set, since it was incredibly explicit.

After explaining everything, just imagine the children that were taken to the cinema with their parents and saw the violence, alcohol, drugs, explicitness with a spoonful of blood. I mean, they could get easily traumatized and also bring an early learning of things they shouldn’t know at a young age they could be at.

As a self-proclaimed professional movie reviewer, I always check Metacritic, Rotten Tomatoes and the parental advisory on sites like IMDb. It’s just one click away. Shame on people who decide to take minors who clearly don’t have the maturity for watching such kind of films. Shame on the movie theater for letting a literal child walk inside a showing of a movie they should have known was rated R.

In conclusion, people should respect the set audience rating because it’s there for a reason as well as investigate about the movie you want to watch on family movie night, because your lovely day might turn sour when you notice your child’s face while watching an explicit scene that you didn’t really expect to see in the movie.