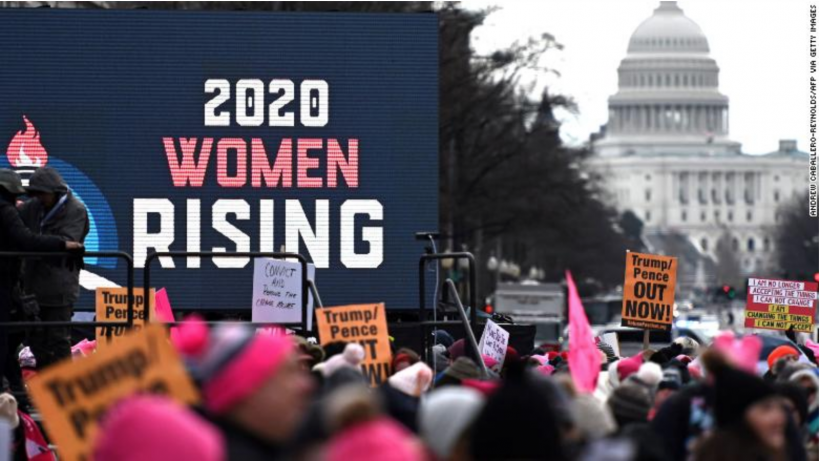 “ Women’s March is committed to dismantling systems of oppression through nonviolent resistance and building inclusive structures guided by self-determination, dignity and respect. “

On January 18th, a non-violent movement took place in the streets of Washington, D.C. The annual women’s march happened a few weeks ago in its 4th edition. But first of all, what is it?

The women’s march started as a reaction to the election of President Donald Trump, to be transformed into a movement to elect more women to public office and show their power in the polls. This contributed to the election, in the midterms, of several women of color from the Democratic party.

According to their website, they base themselves on “unity principles”, these being rights that are “endangered” due to the president currently running office. Their unity principles are workers, reproductive, LGBTQIA, immigrant, disability and civil rights. All these, along with environmental justice and ending violence.

At 10 a.m., 10,000 people gathered to march on Freedom Plaza. Unfortunately, this is a minimal crowd compared to their first edition, who drew in around 1 million people, which is a lot compared to the city’s population that is situated around 710,000 people. Still, that doesn’t mean the passion didn’t remain the same.

After researching, I realized the women’s march stands for everything I stand for. I agree with their cause completely; all these rights have never been more in danger due to the current president in office, and it’s a violent turn from what the country had for two terms in a row. We have seen several hate crimes against every one of these causes and not only from certain groups of people but from Mr. President himself. It is right that not only women but everyone takes a stand for what they believe in.

President Donald Trump is threatening a majority of the country he rules because it is a misconception that women, blacks, immigrants, disabled and LGBTQ+ people only conform to a small part of the country and that everyone is white when the United States is a nation built on immigrants. He’s not only threatening his country but the world too.

Like I previously mentioned, the women’s march defends environmental justice, so I had to address the issue; the U.S. is a nation with such power, and we are in times of constant danger because of the high climate temperatures and what does he decide to do about it? Nothing. Absolutely nothing. So these types of events are only necessary to feel a little glimmer of hope and use the power we have: the power of the people.

I loved the effort that the attendees had with making the protest signs—creativity at its best. I am proud to have reported on such a special event that looks for all types of equality and respect but only searching it through peace.