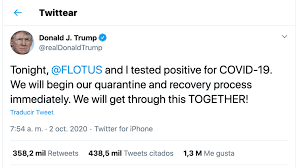 As we all know,  the United States President, Donald Trump, and his wife, Melania Trump,  tested positive for the coronavirus earlier last week. Some people find it ironic that he got the virus because, since the beginning of the pandemic, he was making jokes about it, and he recently said “the end of the pandemic is in sight.”

He tested positive just days after the presidential debate with the democratic nominee Joe Biden.

The word on the street spread quickly, and everyone was in tension after a rumor that one of the president’s close advisers tested positive. That same night, around 1 am Mr. Trump, posted a tweet saying that he tested positive and that he will “Begin the quarantine and recovery process immediately and that we will get through this TOGETHER”.

He was promptly moved to the Walter Reed Medical Center after showing symptoms and was given experimental drugs. On the first day in the hospital, the president had high fevers and was given oxygen. The next day, doctors said that he was fever-free and off oxygen but “not out of the woods yet.”  The day after that, Mr. Trump left the hospital for a short car ride past supporters outside. This was scandalous, people were shocked and critical about the president’s behavior while sick. The  next day the president tweeted that he felt  “better than he did 20 years ago” and returned to the White House.

Rarely  the recovery is so fast, but his medical team explained that they gave him intravenous antiviral drug Redmi Sivir, a Regeneron antibody “cocktail” and the steroid Dexamethasone – as well as other more standard supplements and medication. He was also receiving the oxygen mentioned earlier.

Now, he is back in the White House and has tested negative for the coronavirus on consecutive days. The president has been desperate to return to the campaign trail, where he has just over three weeks left before the election against Democratic candidate Joe Biden, who is currently leading Trump in the polls. He also refused to participate in a virtual debate.