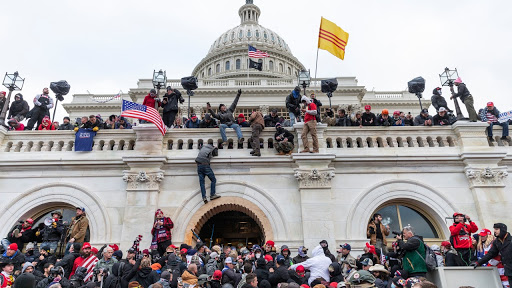 On January 6th of 2021, Trump supporters scaled the walls outside of the Capitol, broke windows, and forced their way into the building. This all happened after a Trump rally, where he decided to tell the crowd to “take action and march to the Capitol,” and they did just that. When the protesters got into the Capitol, they looted offices, took files from Nancy Pelosi’s office, tore her name off her door, and stole items from the building.At the time the Capito was stormed , the lawmakers were still inside the building so officer escort them into a locked room and after that they were shots fired at the chamber. In the process, a woman was shot and killed. Everyone asked Donald Trump to tell his supporters to back off, and approximately two hours after the incident, he finally released a one-minute video via Twitter telling people to go home.

It’s important to notice how the police treated these domestic terrorists. Everyone watched as these people got easy access to the Capitol. They remained in the building for hours and were caught on video taking selfies with Capitol police officers. Many people were comparing this to the police brutality imposed on ‘Black Lives Matter’ protesters in the same city because these people destroyed property and broke into the Capitol but weren’t restrained, hit, or attacked. However, at a BLM peaceful protest, the first resource used to stop the crowd was violence, and the main reason for this difference of treatment was the color of their skin.

To this day, the FBI says they have recognized 400 suspects and already arrested 135 of them. They said the list of suspects is growing by the hour, yet they concede they might not have a reasonable cause to charge all 400 of them. Many people have been helping by reporting their family members, friends, ex-romantic partners, or others they recognized from footage of the Capitol. This was the most damaging attack on the nation’s Capitol since the British army burned it during a War in 1812, this isn’t something that should be taken lightly and everyone that was a part of this horrible attack should be penalized.