This school year, Lux Mundi has implemented new activities to keep the students engaged during the pandemic. For instance, we have started to develop a relationship with international schools, such as Colegio Reims from Mexico City and Colegio Alauda from Spain. On top of that, the first English Olympics took place. To make matters even more interesting, these two developments were combined when Lux Mundi was invited to participate in its first International English Olympics.

All of the students from 7th to 10th grade went through a series of tests to determine if they could compete. The chosen students had the opportunity to represent the school in a specific category within their level of advancement. The first category was Vocabulary, where students had to fill in the blank space of a sentence with the appropriate word. Next was Grammar, where students had to complete a few questions with the correct verb conjugation. The third one was Speaking; where they asked the participants a question, they had one minute to answer verbally. There was an additional category, Sports, in which some selected competitors, no matter their category, had to perform physical exercises.

The Olympics started on Monday, May 3rd, with Vocabulary. Grammar followed the next morning. The Speaking portion occurred the following Thursday, May 6th, and the event came to a close with Sports on Friday, May 7th. During their turn, they gave the corresponding participants links so that they could answer a series of questions in the span of five minutes. Meanwhile, they invited the other competitors to watch a YouTube live in which the teachers talked about the event and education during the pandemic. Afterward, the results were broadcasted in the live so that everyone could see which students received one of three medals.

According to Lucia Perelló, one of the teachers here in Lux Mundi, the students were a little nervous about the competition at first, but once they started practicing and interacting with other people at their levels, they grew more confident and excited. At the end of the day, all three schools grew and, in doing so, had fun. No medal can beat that. 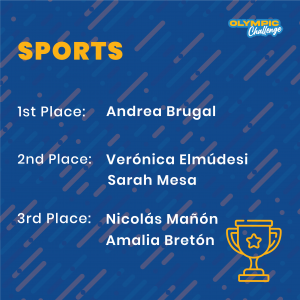 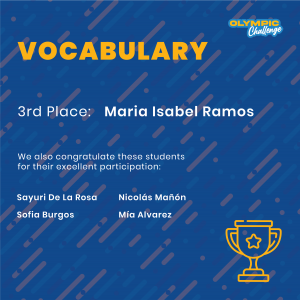 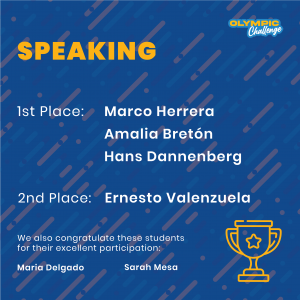 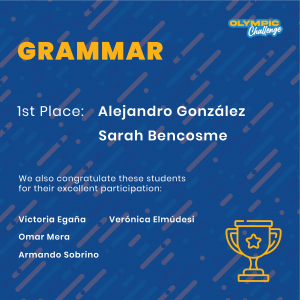 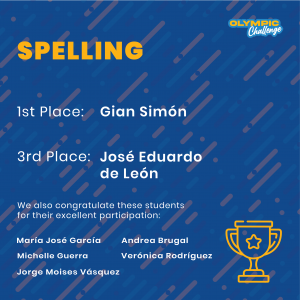