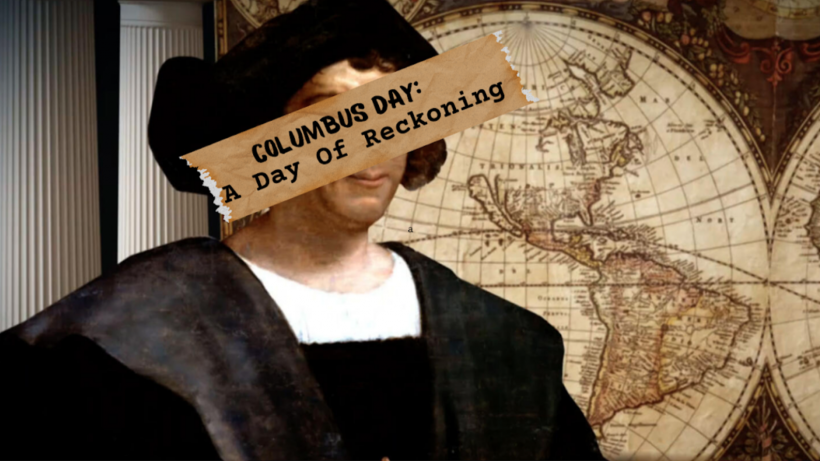 “In 1492, Columbus sailed the blue ocean.” This phrase has long been how students were introduced to Christopher Columbus in elementary school. Students are taught that Columbus was the one who discovered America, crossing the Atlantic on his three ships: La Niña, La Pinta, and La Santa María. There’s even a holiday in honor of the Genoese explorer celebrated in October. In the United States, this day bears his name. In Latin America, Columbus Day is celebrated, commonly known as “Día de la Raza,” also in honor of him.

This celebration has always been organized in our country, and across Latin America, to highlight the role of the conqueror and colonizer as if before the “discovery” there had only been an era that should be erased and forgotten, or territory without inhabitants,  nature without an owner.

So, why is Columbus Day a problem?

To take the meaning of Columbus for indigenous people and their full humanity seriously, we need to renounce the holiday to begin with. There is more to this than the obvious fact that a great diversity of people existed in America when Columbus planted his banner in 1492. There is also the message that Columbus Day sends to all of us: that indigenous people, then and now, are irrelevant, and they weren’t important until Columbus, a white colonizer, arrived in America.

Since Latin America makes up all the nations that lost their identity in 1492, there’s been an emerging problem with our people knowing themselves and identifying as something concrete. Latin America is currently suffering a profound identity crisis, resulting from a historical constant: been “an echo of the foreign.” Now the problem is aggravated because, as a result of the overwhelming influence of the collective media, the uncritical imitation of the foreign puts our cultural heritage at risk more and more since we are forced to renounce the triple Afro-Caribbean, Indo-American, and Spanish roots.

Why is it important to recognize and accept multicultural heritage? Cultural identity is defined as the group of values, traditions, and beliefs that coexist within a social group, and this set of beliefs can act as the feeling of belonging of an individual in said community. A sense of belonging that lasts in the collective ideology will always remain in the memory even not living in the municipality.

Recognition and respect for the different cultures that make up a nation must reflect in the classroom. Far from being a source of dissolution, an education that includes all ethnic and cultural components is necessary for the health of culture, social stability, and the nation’s economic future. Because of this, October 12th should serve us as an opportunity to celebrate us finally making progress in recognizing just how many ethnicities make up our nation.