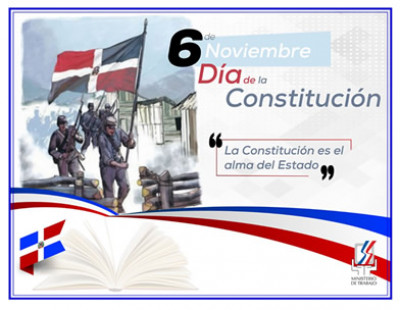 Mark your calendars because this November 6th we celebrate the 176th anniversary of the Dominican Constitution.

What is a Constitution?

A Constitution is a set of fundamental principles that determines the powers and duties of the government and guarantees certain rights to the citizens. The first constitution of the Dominican Republic was promulgated in 1844 in San Cristóbal. Modeled after the French and American constitutions, it intended to protect the freedom gained in the independence war against Spain, and later on, with Haiti.

A Little Bit About Our Constitution

Our national document includes a Preamble, 15 titles subdivided into chapters, and  chapters divided into sections. The Constitution has been modified more than 39 times. The last time, it was changed to allow the president to run for a second time in a row in 2015. At first, it was liberal, but Santana made sure that the president was given more power by adding Article 210.

There are different ways to name our Constitution, such as “Ley de Leyes,” “Carta Magna,” “Ley Fundamental,” “National Constitution,” and “Set of Laws.”

The Story Behind Our Constitution

In July 1844, Pedro Santana took over the presidency of the Junta Central Electoral by force. The Board summoned the Electoral Assembly to elect the members that would write the new Constitution. Sometime after, they established that the Legislative Power represents national sovereignty and placed the Judicial Power in an independent position, while the Executive depended on norms. Santana was not pleased with what the members had decided on, provoking a political crisis between the Assembly and the Junta Central. It wasn’t until Tomás Bobadilla requested a new article that the situation was resolved. Once the addition of this article was approved, the Executive Power didn’t have any more changes. This is how the first Dominican Constitution was made.