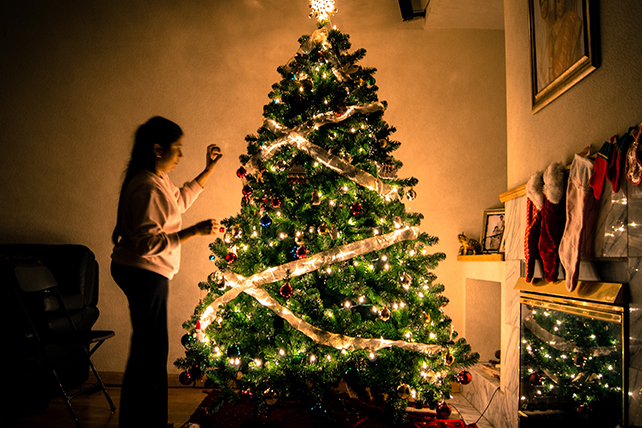 Ah, December… You can already feel the “Christmas spirit” that people talk about. However, for Andrea, it was irrelevant since she didn’t believe in Christmas. She even thought those famous “Christmas miracles” were fake. It was late at night when Andrea was passing through a small market, specifically on the fruit side, when she turned her head and looked to her left. She thought she was going crazy, as she suddenly saw a bright light coming out of nowhere.

Andrea got closer to see if it was real until she heard a soft voice to her right. It was an old woman with marked wrinkles and white hair. The lady asked her if she needed anything, but Andrea couldn’t answer. She felt admiration for that lady without even knowing her; it was as if there was a huge connection between them, or at least that’s what she thought. Andrea asked her to put three oranges and four liches in a bag. She finished paying and quickly left, as she was very confused with the situation.

When Andrea arrived at her house, she decided to have an orange for dinner  since her appetite was gone after all that happened. She went to lie down and quickly fell into a deep sleep. She dreamed of an episode that marked her: the rare terminal illness that took her mother away. As a believer in Santa, Andrea wrote “I want my mommy to heal” in her Christmas letter, but unfortunately, it never happened. After a few weeks, she passed away. Little Andrea felt disappointed by Santa; she promised herself she wouldn’t believe in him again, and she kept her promise all over the years.

What Andrea did not know was that the lady she had met before was not the fruit seller. She was an angel who wanted to help Andrea by granting her, through the fruits, the power to see and talk with her mother again. While she was falling into the dream, she heard her mother’s voice. She couldn’t see her face well, but Andrea was sure it was her. Andrea didn’t know what kind of dream she was in, but she wasn’t stupid enough to waste this opportunity.

She went to hug her mother, but she couldn’t move from where she was. Her mother looked younger, brighter, more like her. Andrea immediately asked her why she left so quickly.. Her mother replied that it was not in her plans either.However, she always kept her safe and protected. She didn’t quite understand what her mother meant by that. Suddenly, the face of that old woman came to her mind. At that moment, her mother answered: “Did you see that I didn’t leave you alone? I only need you to promise me one thing, Andrea.Don’t stop believing in Christmas. Everything happens for a reason, but this, this is a Christmas miracle.” She thought this was a joke, but there was no evidence that this was fake. Just at that moment, Andrea’s mother started to disappear. Andrea yelled, “I love you,” and she barely heard her mother say, “I love you more”.

After this valuable moment, she woke up and noticed it was the morning of the next day. Andrea went to the market again to search for the lady, but she almost fell when she realized that there was a man selling behind the counter. Desperately, she asked him about the lady, and he told her that no woman worked at that market. At that moment, Andrea knew it was a true miracle by her mother.