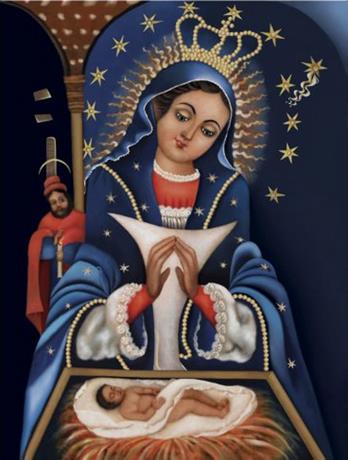 Every year, we celebrate on January 21st the Day of our Virgin of Altagracia in the Dominican Republic. On this date, we usually remember this Virgin, and thousands of devout Catholics come to the Basílica of Higüey to profess their faith to whom they call “La Patrona de Higüey”, or the protective and spiritual mother of the Dominican population. It is a very relevant celebration in our country since most of our population is catholic and praises The Virgin of Altagracia.

Virgin of Altagracia’s origin is based on different stories; however they are all based on similar miracles. One of them claims that a colonizer lived on one of the islands with his family and traveled to sell his cattle. One time, each of his two daughters gave her a commission; the oldest requested skirts, ribbons, and lace, while the younger, who was more religious, asked for an image of the Virgin of Altagracia. He was shocked because he had never experienced anything like that.

The man spent the night at an old friend’s house at the end of the journey, and while they were eating dinner, he expressed his disappointment since he had only been able to get what the eldest daughter had asked for, despite having searched for the image of the Virgin of Altagracia, which seemed not to exist. Upon hearing that comment, an old man who had asked to spend the night in the same house, and who was sitting in a corner, got up and told him that the Virgin of Altagracia did exist and that he carried the image of her.

By Alejandra Gautier and Esperanza Handal